Can Mould and Dampness in my Home cause Asthma?

Yes, there is a clear link between damp, mould and asthma. Research has clearly shown that living with mould causes and worsens asthma symptoms, with children being 3 times more lively to suffer as a result.

Many people across the country are currently living with damp and mould in their home. Sometimes it may seem like just a minor or unsightly issue, however it could actually be very dangerous for your health.

Living with Damp and Mould

Living with damp and mould can cause a range of health issues, especially if your damp and mould problems have been going on for some time. As social housing disrepair specialists, we are constantly hearing from clients who are living with disrepair – particularly mould and damp – about breathing issues and asthma which have been caused or made worse by living in these conditions.

One of the most common questions we receive is whether it’s possible to make a compensation claim for asthma caused or worsened by damp and mould, which is likely because asthma is such a common outcome of living in a home with damp and mould.

With AWH Solicitors, you can claim compensation for asthma and other respiratory illness caused by mould in your home if you are living in social housing and your landlord has failed to improve the conditions.

Are you living with mould causing you illness? Then get in touch. 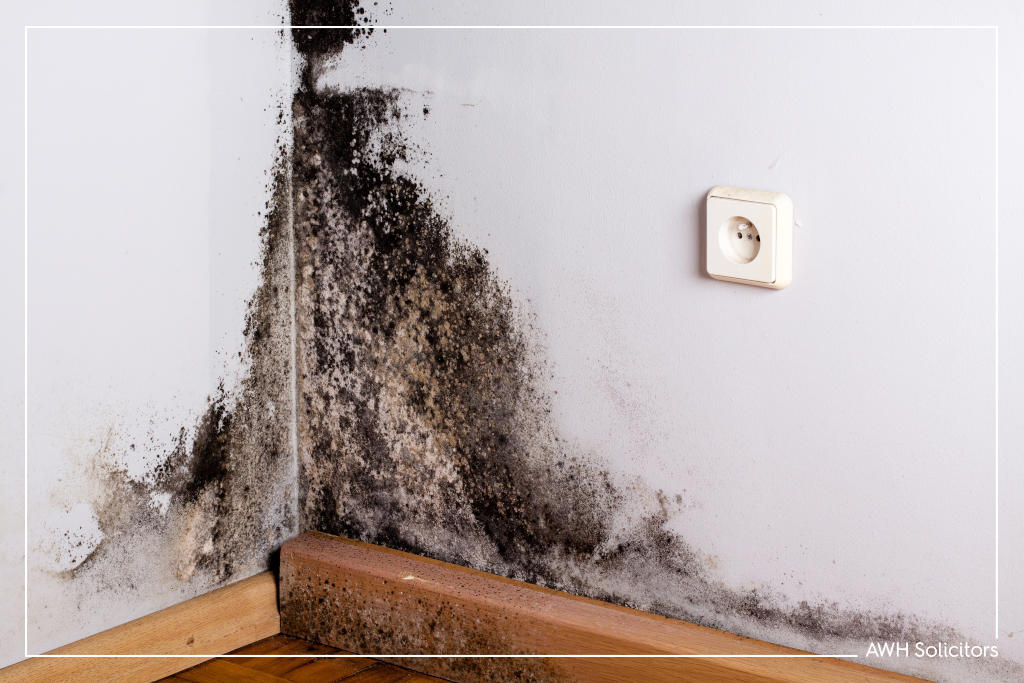 Damp and Mould Issues in your Home Causing Asthma

Asthma is a common condition that many suffer from. In fact, over five million people in the UK across all ages are currently being treated for asthma, and there is a clear link between asthma and mould.

Research has shown that exposure to damp and mould problems in your home increases the likelihood of you and your family developing new or triggering current asthma symptoms by 50 percent.

On top of this, living in a home with a damp and mould issue makes children up to three times more likely to develop asthma than if they lived in a home without any problems.

There are many causes for damp and mould and in some cases it may be easy to fix. However, if you have damp and mould issues in your home this is likely a result of structural damage. If you are renting this is unlikely something you have any control over, so you need your landlord to carry out repairs. Unfortunately, not all landlords take their responsibility seriously and may fail to provide the repairs you require – even when they know your health is being seriously affected.

As a tenant you have legal rights, and if you are living with damp, mould or other forms of disrepair that your landlord has ignored you can claim – with the help of solicitors – for repairs to be carried out and for compensation for your illness.

Our social housing disrepair and respiratory specialists can help you make a claim if you live in social housing, you have suffered from asthma, or your asthma symptoms have worsened as a result of damp and mould in your home, and your landlord has failed to act. We are specialists in claiming for compensation and repairs to be carried out so you no longer have to live in these poor conditions. Compensation will help you cover the cost of medical treatment and any financial losses you’ve suffered as a result of your condition.

If you or your children live in social housing and are suffering from asthma due to damp and mould problems in your home, we may be able to help you.
Get in touch

Asthma is a breathing condition that affects your airways, which are the tubes that carry air in and out of your lungs.

The condition causes your airways to become swollen, narrow and clogged with sticky mucus, making it hard for you to breathe clearly.

You may be more likely to develop asthma if you have one or more of the following:

You have a higher chance of developing asthma if you are exposed to damp and mould and other poor housing conditions in your home. Asthma is also more likely to develop if you are a smoker or you smoke around your children.

You should look out for common asthma symptoms, which include:

These symptoms are not always constant, and can often come and go.

If you or your children have any of these symptoms you should visit your GP, who will be able to assess your condition and may diagnose you with asthma. They will then provide you with the best treatment for your condition.

Your GP will also be able to suggest whether the mould and damp problem in your home could be a cause of your asthma. If they find that it is, we could help you make a claim.

Have you or your children developed asthma because your social landlord failed to fix a damp and mould issue in your home?
Get in touch

What are Asthma Triggers?

Asthma has a range of triggers, some which are unavoidable, and it affects everyone differently. Some well-known triggers for asthma sufferers include:

Your asthma may flare up from contact with one of these triggers, or you might be affected by a number of them.

There are certain people who are most likely to be triggered by the above and display symptoms of asthma. These include:

However, someone who has never had symptoms before may still be affected by these triggers too.

If you notice yourself or your children suffering from asthma symptoms after you have been around any of the above triggers you need to see your GP for advice. If you suspect that your symptoms have been caused or made worse by damp and mould in your home, you should let them know that too.

How can Asthma be Caused by Damp and Mould?

You may think the damp and mould issue in your home is simply an ugly inconvenience, but it can actually be very dangerous for your health.

Just under 50 percent of people who already have asthma say that being in a damp or mouldy room triggers their symptoms and causes breathing restrictions to worsen.

Damp conditions can make breathing difficult and are perfect for harmful bacteria and viruses to grow, whilst mould and fungi emit spores which can enter your body and cause your immune system to overreact, causing coughing fits or asthma attacks.

Mould spores are very tiny and cannot be seen by the naked eye, so you won’t notice when you breathe them in until your body reacts by triggering asthma symptoms.

Spore numbers also increase when there is a sudden rise in temperature in a moist environment. This means that if your landlord says that the damp and mould issue could be resolved by blasting your heating on full, it could actually aggravate your asthma symptoms more.

Cold conditions in your home can lead to damp and mould developing, and also tend to lower your body’s resistance to general respiratory infections.

This means that often while the damp or mould grows, your body’s immune system becomes weaker and is less able to fight off asthma triggers.

If you are suffering from asthma because of the conditions in your rented property, our housing disrepair solicitors can help you claim compensation for your suffering.

Did you know that in the UK a child is admitted to hospital every twenty minutes because of an asthma attack? In fact, children in the UK have amongst the highest rate of asthma symptoms worldwide.

This shows just how common and severe asthma in children is in the UK.

Children are slightly more prone to developing asthma than adults, and many adults in the UK who have asthma developed the condition as a child. One in eleven children suffer from asthma, whilst one in twelve adults suffer from it.

Scientific research has shown that exposure to mould or damp in the home from birth to a child’s first birthday increases their risk of developing asthma by up to fourteen percent.

What are the Effects of Housing Disrepair on Health?

From the many investigations which have taken place into the link between damp, mould and asthma, it is safe to say that housing disrepair issues can have a harmful affect on your health.

It can affect you and your family physically and mentally, and may get in the way of you living your life comfortably.

For example, you may experience depression or anxiety which makes you unable to leave the house, forcing you to breathe in the damp air and mould spores even more.

Your children may have to take time off school for illness, or may be emotionally affected by your poor living conditions. This can have a knock-on affect and result in behavioural issues which may affect their education and social life.

No landlord should let you and your children live in an unsafe environment. They should resolve damp and mould issues as soon as they can after they have been informed of the issues. If they fail to take action, it can seriously affect your health and wellbeing.

What you Can Do when you Think you have Asthma

If you or your children have any symptoms of asthma and you think they might have been caused by damp or mould growing in your home, visit your GP first.

They may be able to diagnose you and provide you with treatment such as an inhaler for when your asthma is triggered.

You should also make your landlord aware that the conditions they are allowing you to live in have made you seriously ill. Give them a chance to carry out repairs, but if they fail to do so, contact us for help.

When you claim with us we will consider everyone who has been affected by your landlord’s neglect. So, if you live with your children and they have also suffered, we will include them in the claim so that you get the maximum compensation amount necessary to let you be comfortable in your home without having to worry about running into financial issues and further health problems developing.

Get in touch with our expert housing disrepair solicitors today for expert advice, guidance and support.