Find Out if You Could Make an Armed Forces Injury Claim

Working in any part of the military usually means that you’re well prepared for injury or illness – you are trained to the highest level, and know what kind of job you’re getting yourself into. Despite this, unexpected injury or illness can sometimes happen to armed forces personnel as a result of military negligence, at which stage you are entitled to make an armed forces injury claim.

Sure, sometimes the injury is minor, but sometimes, if it’s more severe, and it can end up affecting you for life.

You might be eligible to make a armed forces claim if you have been injured or made ill whilst an employee of the British military. Compensation won’t turn back time, but it can help you and your family to heal and move forward without the stress of financial burdens weighing down on you.

What Types of Injuries in the Armed Forces can I Claim Compensation For?

As a member of the armed forces, you are more than likely aware of the fact that there are a range of injuries that you could suffer. The injuries and conditions listed below are the most commonly suffered by military personnel, and are also what you could bring an armed forces injury claim for.

Of course, in order for you to pursue an armed forces claim you must be able to prove that your injury or illness was genuinely caused by an incident that occurred whilst you were serving for the armed forces.

All of these injuries can potentially have a long-term, permanent impact on you and your family for life, so it’s important to know that it is possible to pursue a claim to reduce how severely you suffer.

Have you been injured or made ill because of your job in the Armed Forces? We could help you claim compensation for your suffering. 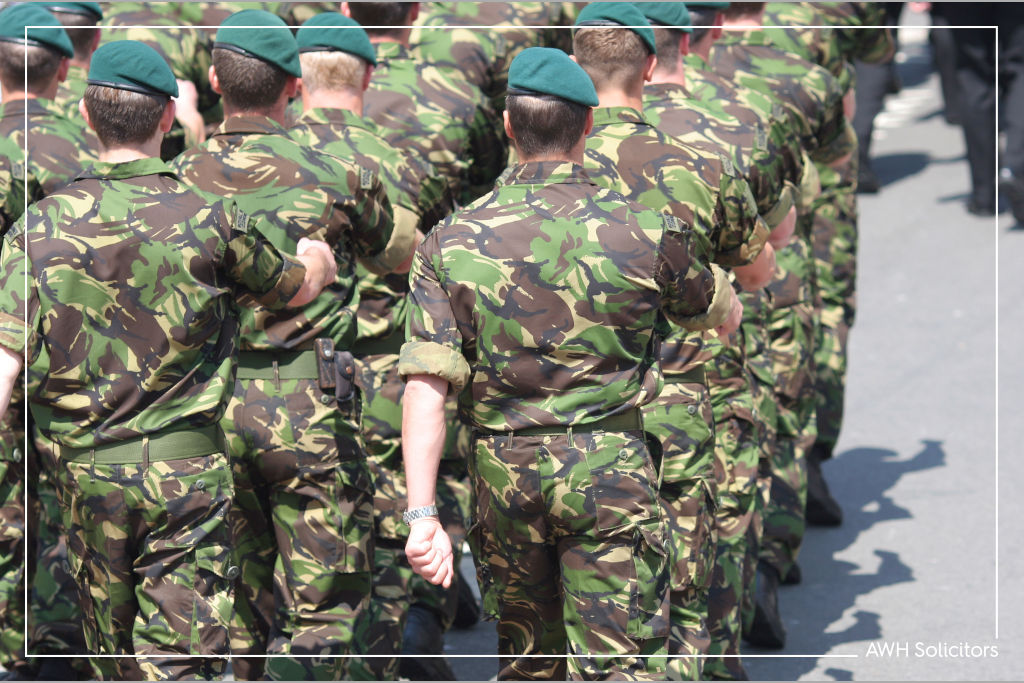 When can Someone Start an Armed Forces Injury Claim?

Members and ex-members of the British Army, Navy, RAF and sub-branches of these can pursue an armed forces claim after suffering injury or illness due to negligence experienced whilst being part of the forces.

As with any claim, the compensation amount that you are awarded is carefully calculated using preset formulas which take into account the extent to which your injury or illness has affected you and your family.

It may feel wrong to make an armed forces claim because of the nature of the job, however if your life has been seriously impacted by an act of military negligence or an incident that occurred whilst you were serving in the forces, you deserve to be compensated.

Do any of these injuries sound familiar? You could claim compensation with the backing of our experts.

How Negligence in the Armed Forces can Cause Injury

By signing up to serve in the military, you are more than likely aware that at some point during your career you could suffer an injury from work. However, this doesn’t mean that your employer doesn’t have to take the correct precautions to protect you as much as possible.

For example, you should be provided with the correct equipment for your job. If you are working in a loud area, or in an area where sudden loud noises could be made you should be given adequate hearing protection such as ear muffs or plugs.

Similarly, all equipment that you are given should be functioning and safe. If you are given unsafe or faulty machinery, equipment or protection to use whilst in a training or combat environment and you get injured, your employer is at fault.

You should note that it isn’t possible to bring an injury claim against the Ministry of Defence for injuries suffered as a direct result of combat. However, you can claim if you can prove than they have failed in their duty to protect you as an employee.

How Injury Can, and Should be, Prevented

Employers should always ensure that you are fully trained and briefed in whichever way you need to be before assigning a task to you. A lack of preparation or poor briefing could lead to serious training, combat, sports, vehicular and fire accidents occurring.

Not only this, but those in charge should always ensure that the correct safety procedures are followed at all times so as to ensure the likelihood of you and your colleagues suffering an injury is very small.

If your superiors do not make sure that you are as protected as possible in training and combat situations, they can be held accountable for any injuries or illnesses you suffer. This also means that they must do their best to make sure the conditions you work in do not harm you.

For example, non-freezing cold injuries like trench foot are caused by exposure to damp, cold conditions. It is your employer’s duty to provide you with a warm and dry environment where possible, to prevent trench foot from developing.

Have you developed an injury whilst serving in the British military due to your employer’s neglect of health and safety protocol? We could help you make a armed forces claim.

When Can I Make an Armed Forces Injury Claim?

If you have suffered an injury or been made ill from serving in the Navy, RAF, Army or any other sector of the British armed forces, you could make a claim for compensation. However, there are some requirements that you should know about before you seek legal advice.

For example, there are certain time limits on making a claim depending on where the incident occurred, how old you were (or your loved one was at the time) and who is bringing the armed forces claim:

Before seeking to make a claim, you should contact an expert in military claims and military hearing loss claims so they can explain the process to you.

How will Making an Armed Forces Claim Benefit me?

It might seem like making an armed forces injury claim won’t help you because it can’t rewind time and prevent the injury or illness from happening, however there are many advantages to making a armed forces claim.

Just one advantage is that it can provide you and your family with the compensation you need to move forward with your life. You might need to take time off work, or even leave your job completely because of your condition, which can leave you in a stressful financial situation. Or, you might have to pay for medical treatment, prescriptions, or adjusted housing due to a change in your physical abilities.

Another advantage to making an injury claim is that it highlights potentially dangerous pitfalls and issues in certain areas of training and combat situations that arise due to employer negligence. This means that, going forward, your employer can, and more than likely will, take the steps they need to to prevent any of your colleagues suffering like you have.

If you want to pursue an armed forces injury claim, we can help you do so.