Women in the Military at Risk of Injury

It has only been recently that all areas of the armed forces have been open to women. However, despite the roles now being open to females, the equipment provided is still optimised for the male body.

As a result, women in the military have been found to have more frequently suffered from serious issues as a result of kit that has not been correctly optimised for them.

Common Equipment Issues Leading to Injury in Women in the Military

There have been a number of issues with the equipment that is provided for women serving in the army.

Female Royal Marine and Army recruits are suffering career-threatening injuries from wearing a kit-carrying system that is specially designed for men. The 90-litre rucksack is standard issue and all recruits are expected to use it, yet the weight distribution is optimised for a male body. This is leading to immense pain and avoidable injuries for many female recruits.

Leg and hip problems are becoming commonplace, whilst there have even been reports of major incidents. The first female Royal Marine, Phillipa Birch, suffered a stress fracture when she fell whilst carrying all the components of the ‘Virtus’ body armour.

How the Military has Responded

The military has claimed that this armour system is ‘designed to address the negative impacts on tactical mobility, survivability and muscular skeletal injury caused by excessive load carriage by the dismounted soldier,’ as well as apparently being ‘better fitting than older body armour.’

They make further claims that it has a radical innovation of a ‘dynamic weight distribution system,’ and that this is achieved through a ‘spine’ device that is ‘linked to the user’s waist belt and helps spread the load of the body armour [and] a daysack across the back, shoulders and hips.’

This equipment is optimised for the back, shoulders and hips of men, and when not taking into consideration the differences in the male and female body, the armed forces are putting themselves at considerable risk of negligence claims by not optimising this equipment for women.

Suffered an Avoidable Injury in the Military? Start your Military Accident Claim

Our industrial disease team are highly experienced in helping people who have suffered from military accidents and can tailor their advice to suit each specific circumstance.

Our team are specialists in military accident claims and military hearing loss claims.

If you think that you may have been injured by the military’s inability to provide the right equipment, get in touch. 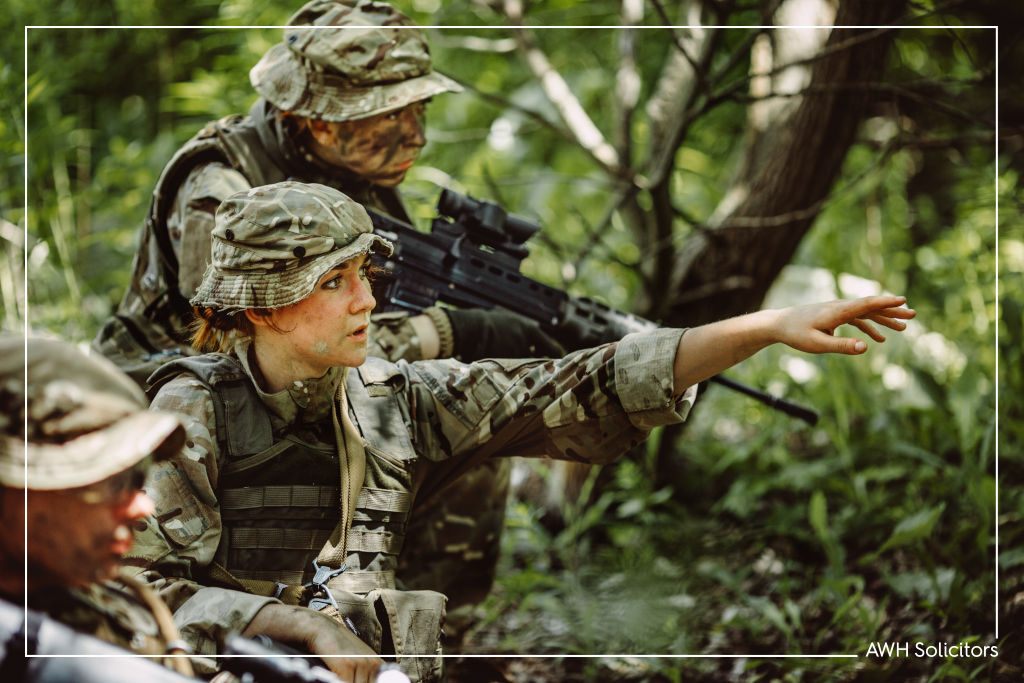 For women in the military, the lack of suitable equipment is predominantly leading to accidents in training. Therefore, before they are even deployed, women in the armed forces are suffering from injuries that could have been avoided. Training accidents most often happen from lack of preparation, and from poor equipment – which is the case here. If you have experienced one of the following whilst in training, we can likely help you:

Although there are supposed to be procedures in place that will reduce the chances of a training accident happening, this is not the case if the differences in male and female bodies are not being considered by the military. If you have suffered as a result of this, then we can help you claim compensation.

What Can you Claim for in a Military Accident?

A military accident claim works in the same way as all industrial disease and personal injury claims, so you can be compensated for:

We want to provide help for you to focus on your healing process without having to worry about the significant financial implications. With our help, you can get the compensation that you may need to move forward from your accident.

Get in Touch for Expert Advice

With women only recently being welcomed into the military, negligence claims for female members of the armed forces are a relatively new legal field. However, our expert solicitors are highly skilled and have a vast amount of experience in military claims.

Contact us today to find out if you are able to make an armed forces injury claim with AWH.