Fire Caused by your Faulty Washing Machine or Tumble Dryer?

Did you have a faulty washing machine or tumble dryer in your home that caught fire? Then we may be able to help you claim compensation.

With yesterday’s news that yet another range of faulty Whirlpool machines are being recalled due to a production fault that can cause fire, it’s important for people to know that they could claim compensation if their faulty household appliance caused a fire in their home.

However, it is important to be aware that:

For you to be able to claim for a tumble dryer fire or a washing machine fire, the fire must have caused damage and loss that is not already covered under any insurance that you have in place.

If your household appliance caused a fire, then get in touch. We will help you assess if you can make a claim, and how much compensation you may be entitled to. 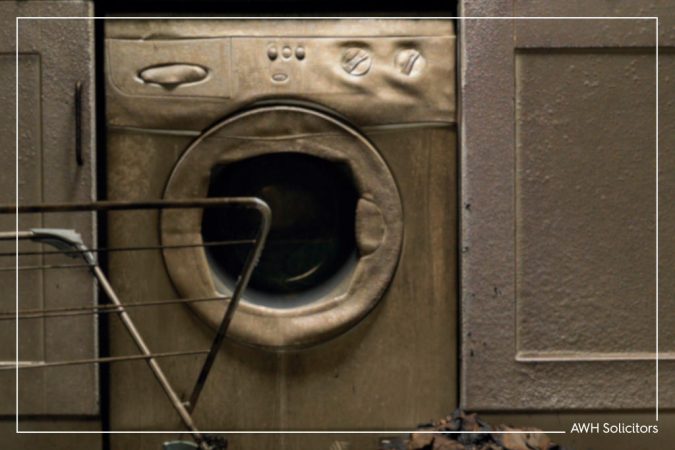 A model checker website has been launched by Whirlpool, however it so far has been largely unavailable, assumably due to high usage. It’s believed that 79 UK house fires resulted from the fault at this stage.

Whirlpool has so far only offered their apologies for the inconvenience.

The latest washing machine recall has come after a tumble dryer recall earlier this year, where approximately 800,000 tumble dryers were recalled by Whirlpool, also due to a fire risk.

According to a Which? investigation from 2018, 60 UK house fires are caused by household appliances every week. These fires are mainly caused by tumble dryers, washing machines and fridge-freezers. Other appliances that are at a higher risk of causing house fires include cookers, ovens and dishwashers.

MPs and others have criticised companies for their slow response to news their products are a fire risk, and have said more should be done to protect consumers. Unfortunately, yesterday’s news shows that many risks still continue to exist, putting lives and homes at risk.

If you had a house fire caused by a faulty tumble dryer, washing machine or other household appliance, and your home contents insurance didn’t cover the damage caused, we can help you claim compensation.

Get in touch to find out if you are owed compensation today.

When her eldest daughter had returned home, she proceeded to turn the tumble dryer on before leaving to go and visit her boyfriend.

It wasn’t until a neighbour who spotted smoke emerging from the house urgently notified the claimant, who rushed home with her children as quickly as possible to find their kitchen completely charred and destroyed.

In addition to the kitchen, the living room, staircase, and several bedrooms suffered severe fire-related damage.

The claimant was also incredibly upset to find her three dogs and one cat had been unable to escape the fire and subsequently died.

As the claimant’s home was part of a housing association, support workers were able to offer her £25 per night so that she could stay in a hotel for nine nights with her children whilst the cause of the fire was investigated and repairs were carried out.

Report indicates fire may have been caused By Indesit tumble dryer

A fire brigade report indicated that the fire may have been started by a defective Indesit tumble dryer, which was turned on by the eldest daughter after coming home.

Indesit is a brand of appliances owned by the larger parent company Whirlpool who have been subject to controversy in the press after product recalls for dangerous tumble dryers.

As a result of the fire, the claimant suffered losses valuing £17,049.

As the fire occurred in the kitchen, not one item in there was salvageable and over £9,000 worth of valuables were destroyed.

The loss of the aforementioned beloved family pets also valued over £2,000.

Whirlpool dispute claim and are reluctant to admit liability

Whirlpool also raised the fact that the claimant had not disclosed any independent forensic report in respect to the potential cause of the fire.

Finally, Whirlpool raised the fact that an engineer (who was not an employee of Whirlpool or an engineer approved by the company) had been called out to repair the tumble dryer before the fire.

Whirlpool had no details of what repairs were needed and what repairs took place during the engineer’s visit.

AWH opposed this argument as we had was clear proof that the repair work only involved the simple reinstalling of a belt reel, and this was amended 12 months prior to the fire.

We also had photographic evidence of the kitchen floor and tumble dryer which supported the claim that the fire started within the tumble dryer.

Whirlpool continued to defend the claim, maintaining that the claimant had not taken appropriate care of the appliance.

Despite being unable to gather forensic proof that the tumble dryer started the fire, we considered the claimant had a very strong case against the manufacturers.

Success for our claimant

AWH was able to provide evidence of some of the purchases made by the claimant by collecting several of her bank statements both before and after the fire, and there was enough documentation to prove our client had incurred genuine losses.

AWH Solicitors provided Whirlpool with a Schedule of Loss and supporting evidence on 4th April 2017.

Whirlpool maintained that liability was denied and that the claimant had still failed to meet the evidential burden. However, on 30th August 2017, Whirlpool’s representatives, Plexus Law, made an offer to compromise the claim on a basis of less than damages initially claimed.

The offer of £8,000 was accepted and has since been paid to the claimant.

This case success proves that AWH will always seek justice for genuine claimants, even if our clients are not always able to provide proof of the losses they have faced in great detail.

If you’ve suffered losses or have been injured due to a fire caused by a Hotpoint, Whirlpool or Indesit tumble dryer, then AWH may be able to help you claim compensation.

We may be able to help you if it can be proven that your machine had known faults or that the fire was caused by a defect.

At the beginning of your claim we will always ask you for the serial number, so if you have a record of this, please have this ready when you get in touch.

A case such as this can be very challenging and in cases where there is not enough evidence we will unlikely be able to proceed with your claim. Our solicitors will inform you from the start what likely outcome you should expect and which next steps are available to you.

Don’t hesitate to contact us; our solicitors will be able to offer you sound legal advice on the steps to take if your property or possessions have been damaged by faulty appliances.

If you’re suffering from a similar issue, contact our personal injury solicitors Manchester on 0800 999 2220 or use the contact form today.
Get in touch