Whilst working on the British Coal Respiratory Disease scheme, I shared a platform with Andy Burnham MP and have been interviewed on BBC News. I have been successful in the court of appeal on a procedural point and I have been involved in two multi-million pound settlements.

I have also qualified as a mediator and conducted two successful mediations.

Since 2009, I have been establishing a clinical negligence caseload including delayed diagnosis, informed consent and failure to treat cases across a spectrum of fields from an allergy to iodine to consent issues and prescription errors to a failure to refer for a CT scan following a fall which led to a left sided paralysis.

What aspects of your job do you enjoy the most?

I enjoy helping clients to achieve recognition that their injury or condition has been caused because their employer or medical professional has not undertaken their duty to assess risks and taken the necessary action to protect them from harm.

I also enjoy sharing my knowledge and experience to assist my colleagues.

Why did you choose a career in the legal sector?

I chose to be a solicitor in memory of my grandmother who wanted me to help other people.

Often the claimant has been hurt as a result of someone failing to recognise a danger or trying to ignore danger in order to do something quicker or cheaper so I want to make sure that this has been acknowledged and hopefully avoided in the future.

Read what other clients have said about working with Nimish: 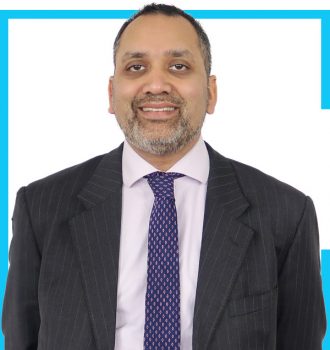